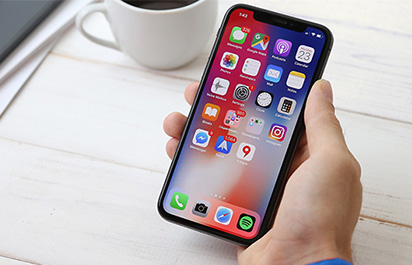 Cross-platform software is a type of application that works on multiple operating systems or devices like Windows, macOS, Android or iOS. The benefit of a cross-platform apps is that you can use the same software on a Windows PC or log in from your laptop or smartphone. An efficient way is to build on universal cross-platform frameworks like ReactNative, Ionic, Xamarin or Cordova. ReactNative and NativeScript use JavaScript, while Xamarin uses C # when developing these applications. The code written in this way is subsequently compiled into the source programming language (depending on the platform), and the result is something that works like a real source application.

This way of creating mobile applications allows us to simultaneously (with the same code) create applications for iOS and Android. Using this approach we make great savings in time and production costs with minimal loss of performance. Currently, ReactNative, NativeScript and Xamarin say they have 100% support for native functionality through their APIs. Xamarin is able to make iOS, Android, Windows, macOS and Linux, while ReactNative and NativeScript are limited to iOS and Android only.

It is known that applications made for the same purpose on iOS and Android platforms look a little different because each platform follows its own guidelines. This fact is the biggest problem of cross-platform mobile applications since the code is written once and used for both platforms. There is a case when the elements graphically match the guidelines of a specific platform, but their position on the screen does not match, ie. the position on the screen is different on different platforms.

These are web applications that use classic web technologies (HTML, JavaScript, and CSS) and “Cordova” as a wrapper that gives them the ability to communicate with system components and compile them into applications available through the so-called “WebView”. Similar to cross-platform mobile applications, here we write program code only once, and other versions (for each of the desired platforms) are generated from that code. Such applications are called “hybrid” because they are not purely native mobile applications (all display is done through the so-called “WebView” instead of the user interface platform), but they are also not purely Web-based (because they have access to native APIs and are prepared for distribution on the appropriate platform).

The problem with hybrid applications is that they do not have access to all system functions and have lower performance than native applications. This problem is pronounced in older phones (especially on the Android platform before version 4.0) where the user interface is slow to render and chopping occurs when performing animation. Although currently, the situation is better, mainly due to the significant processing power of current devices, and partly due to the tools used for development and progress in the optimization of mobile operating systems. It should not be overlooked that by building hybrid applications we automatically inherit all the problems that come with programming on the web (different functionality support for different browsers…).

Progressive Web Apps are Web apps built to be efficient, secure, and installable. These three elements are turned into an environment that feels like a native application. Progressive web applications (PWAs) may run when the device is offline (using service workers), and may have some hardware access to the device that is traditionally only available to native mobile applications. PWAs are always up-to-date thanks to the service worker update process. PWAs allow users to “save” applications they deem most useful on their home screen by creating a shortcut without using any of the app stores (GooglePlay, App Store). Companies that launched Progressive Web Apps saw impressive results.